This story originally appeared on FasterSkier.com. Also view a PDF on SMCAthletics.com here.

The debate to run equal race distances for men and women remains. Molly Peters, the head cross-country ski coach at Vermont's St. Michael's College, has led a grassroots campaign to make equal distance racing commonplace at the NCAA level and beyond. She's the lead voice for The Ski Equal Team. The group sent a letter to the U.S. Ski & Snowboard Cross Country Sport Committee, its Equity and Inclusion Committee, and CEO Tiger Shaw asking for their support in implementing equal distance cross-country racing for their sanctioned events.

The letter opens with a strong message: "In this time of unparalleled social change and reflection, we request that this Committee take an important step forward for equity and inclusion by creating domestic race schedules that offer equal race distances for women and men." Letter signatories include several head NCAA coaches like Becky Woods of Bates and Tracy Cotes of Colby, as well as U.S. legend Bill Koch, and current World Cup overall winner Jessie Diggins.

In speaking with Peters, she emphasizes the desire to equalize the race experience.

"We used to hear that we're trying to equalize the time on course and we want people to have the same race experience – which is based around time," said Peters. "The current model of racing, where women generally race 5 k less than men, offers completely different race experiences for men and women. When you look at the data we provide in the letter, race times get closer when you analyze the longer distances. In those longer distances, race times are much closer when men and women are doing the same distance, not women racing 5 k shorter."

The data provided to The Ski Equal Team by Lily Koffman, a Harvard biostatistician and former collegiate skier, tells a simple story. Of the four classic races analyzed by Koffman, finish times were more similar when men and women both raced 10 k rather than 5 k and 10 k respectively, or 10 k and 15 k, respectively. 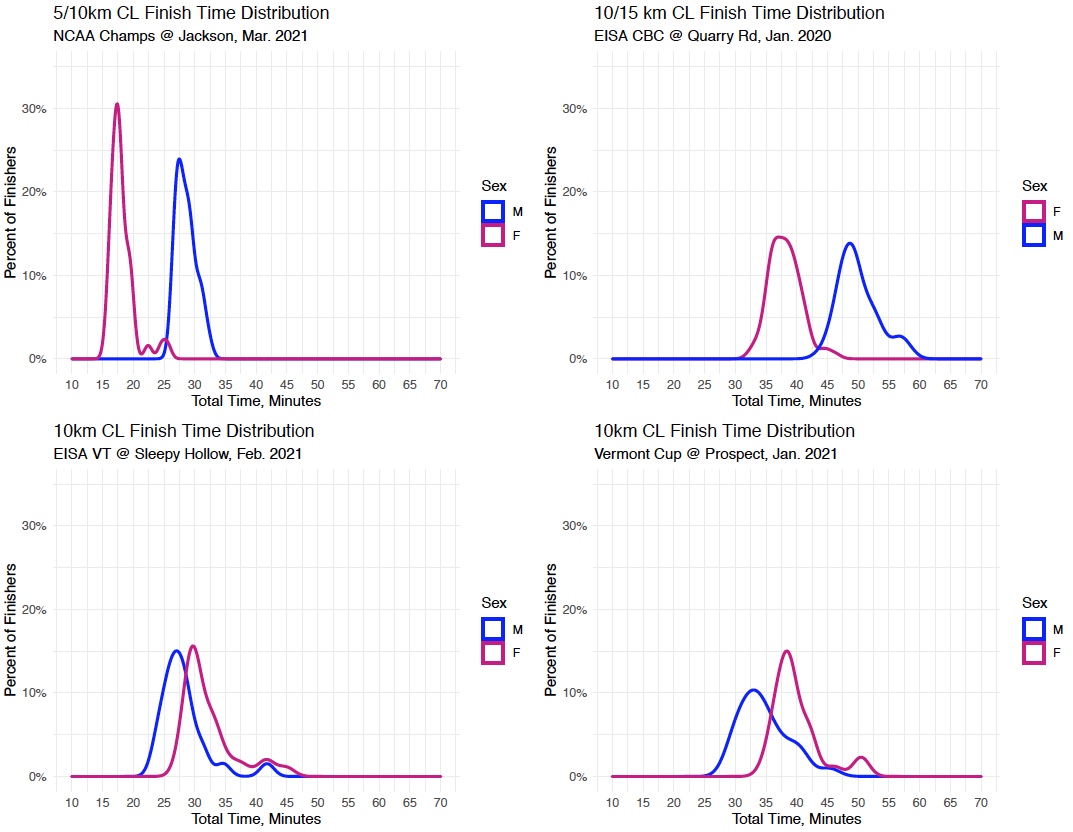 The same trend holds for the skate racing data. The finish times for men and women overlapped more when both genders raced the same distance. In this case, equal distance skate races of 15 k and 13.2 k, respectively. Conversely, skate race data show little overlap in times comparing unequal race distances. What appears to hold true is that if stakeholders want roughly equal time racing for men and women, at least according to this sample, all skiers should race longer distances and of equal length. 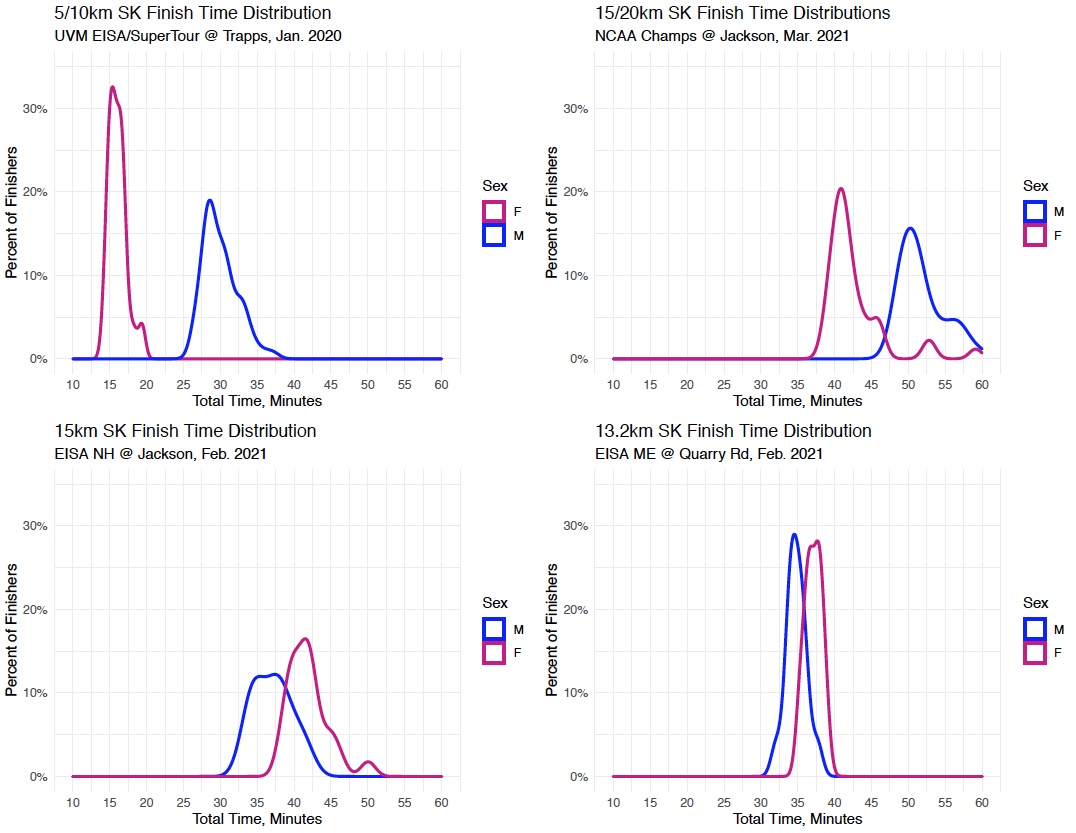 "The difference in time on course for men and women competing in separate distance races show a significant gap and virtually no overlap of time," asserts the Ski Equal Team letter to U.S. Ski & Snowboard. "By contrast, equal distance races show a significant overlap in finish times and consequently a similar race experience for the men's and women's fields. This is not an isolated example – we see similar patterns in other collegiate and junior races. There is no compelling reason to require women and men at any level to race different distances."

The latter also claims female athletes benefit well beyond sport when equal distances are raced.  The Ski Equal Team claims equal racing distances prepare female skiers to expect equal treatment in other aspects of life. (This is, of course, a time when female athletes are empowered to call out entities like the NCAA for unequal treatment.)

The equal distance initiative has set its eyes on the NCAA ski championships too. The Ski Equal Team's proposal to the NCAA's Ski Committee includes several scenarios including sprints, mass starts, and individual start races — all equal distance.

Below are the potential formats proposed by the Ski Equal Team:

University of Colorado Head Nordic Coach Jana Weinberger expressed she does not have strong feelings about the equal distance debate. Weinberger raced at CU as a student-athlete and has coached at the school for many years. "When I was a competitive athlete, I was happy women skied shorter distances, and it never crossed my mind that we should, or that I wanted to, ski the same distance. I was solely focused on competing against the women I raced, as opposed to racing the same distance as men. I never felt that racing a shorter distance was a sexist decision."

According to Weinberger, many of her female athletes are focused on performing their best at the predetermined distances, which in this case are 5 k shorter than the men's distance. "Additionally, I had this discussion with many of the women on my team in the past, and the strong majority did not want to race the men's distances," Weinberger added. "For them, it was not a matter of; I can't race that far, or, the men race farther because they are stronger, but more from the standpoint that I like racing the distances we currently have and am focused on racing women."

Weinberger also has the distinction of serving on the NCAA's Ski Committee. One glaring absence from collegiate racing, well represented at seemingly all other levels of cross-country ski racing, are sprints. The CU coach said she considers adding sprints to the NCAA Championship calendar a more important short-term goal.

"As a member of the NCAA committee, I feel it is more important to add a sprint race to the Championship weekend than to spend our time and resources in having equal distances for men and women," wrote Weinberger.

A 2016 FasterSkier article featuring the different distances raced at the NCAA level for men and women reflected an antiquated notion, or myth, regarding a woman's ability to endure. Former ski racer Annie Pokorny, quoted in that piece, said, "that conception turned into tradition, one that still thrives today in the form of shortened distances for female endurance athletes."

During this inflection point in history when equity and inclusion have become keystones for many evolving institutions, modifying race distances by making them equal in length, has gained traction.

"The underlying sentiment from most parties is that decisions of race distances should be made on the basis of development/speed development," Beckwith emailed. "There are complicating factors in all of these discussions, like NCAA, Junior World Ski Championships and World Cup distances — those training for these specific events feel compelled to do just that."

Those examples of unequal distance racing cited by Beckwith remain for the time being. It's true, women race shorter distances than men in the distance events at Junior Worlds, U23 Worlds, Senior World Championships, Olympics, and the World Cup. That might be another debate altogether: is cross-country ski racing a means to train up the pin-prick of light at the sharp end of the pipeline, and prepare those athletes for specific distance races, like a 5 k for women and 10 k for men? Or should it function as a completely different competitive enterprise?

"Through our pandemic 2021 season we had some latitude to try equal distance in a few more events than we normally would — it seemed to be well received minus some feedback from college athletes," said Beckwith. "As we are planning for 2022 we are looking at the opportunity to shake up distances to make exciting events for competitors, venues, and spectators alike. Specifically, if Eastern SuperTours are approved for Period 3 we have a proposal that would have not just equal distances, but also unique formats."

Back at St. Michael's College in Vermont, Peters knows change starts somewhere. The two most common approaches are from the top down, or at the more local level, from the bottom up. Peters' family owns and operates Vermont's Sleepy Hollow Nordic Center. Peters has helped develop a statement called the Sleepy Hollow Ski Equal Pledge. If you are racing at Sleepy Hollow, everyone races the same distance.

It might make sense before you grind out training for specific distances to check out the set-in-stone race schedules, when they become available, and plan accordingly. They might just be equal.